Daring to be vulnerable 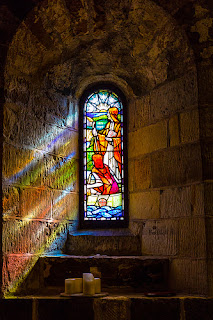 When I was in CT recently, I bought a stained glass piece at the Goodwill...the sight of a jeweled hummer perched on a branch overlooking a peaceful pond and majestic mountains brought me great joy...at a time when joy was at a minimum.

I have a passion for glass...I love how it embraces light and then throws it off in a myriad of shades of color. I have drenched my house in it...from an assortment of glass balls hanging in my windows to crystals that shower my living room in dancing rainbows when the sun comes up...all of it makes my heart sing. I'm not a pottery person, though I do own a few pieces. To me it seems heavy of body and spirit...like it wants to soar but it can't get its feet of clay off the ground.

So today when I read something interesting from my devotional about broken fragments...which my stained glass piece would have been in had I tried to fly it back with me on the plane...it touched something within me. I'm eager to get my piece home...it has been on my mind lately...and perhaps that's why this reading clicked with me. It is a little long, but it is all important...


"From our brief time on earth, it is hard for us to know which parts of our lives are fragments to be thrown away and which parts are fragments of necessity, reflecting a divine work that may be centuries in the making. It was hard, I'm sure, for Abraham to know or Joseph or Job.

Harder still for someone like the thief on the cross.

He was a man who had broken the hearts of his parents by squandering his life, one petty theft after another. So much of his life contributed nothing to the work that God was doing in the world. But with the words, "Remember me when you come into your Kingdom", everything changed.

When suffering shatters the carefully kept vase that is our lives, God stoops to pick up the pieces. But He doesn't put them back together as a restoration project patterned after our former selves. Instead, He sifts through the rubble and selects some of the shards as raw material for another project-- a mosaic that tells the story of redemption.

That one moment in the thief's life was so beautiful in God's eyes that He took it in His hand and pieced it into the grand mosaic. When we stand back and see the mosaic, which has been millennia in the making, we realize that it tells a story of faith and forgiveness. But it is more than that. When we take another step back, we see that it conjoins the story of God's faithfulness to each and every generation--from all that have come before us to all that follow after.

Who would have thought that ragged thief would turn out to be one of the greatest evangelists the world has ever known? How many people over the centuries--people in prison, people in nursing homes, people in hospice care, given days, maybe hours to live-- have recalled the one who asked merely to be remembered and was given paradise? And who knows how many of those people are now in paradise because they turned a defeated head to Christ, the way the thief did, and with tear-filled eyes and trembling lips, said something like this, "Remember me too."
Ken Gire The North Face of God

I've been thinking about vulnerability lately...how it is the foundation for deeper relationships and the platform for going forward joyfully into life.

When we hold on to or protect ourselves from being vulnerable, we close ourselves off to others...we hide behind a self-made fence of presumed security...peaking over the top once in a while, longing to get over the fence, but just not sure how we'll fare on the other side.

I'm thinking this thief got it right. And it's a good thing 'cause up til then he had gotten it all wrong and was running out of time...quickly.

Who knows what made him decide to finally cry out in front of crowds of people, to a Man he had just mocked and scorned? How did he know he wouldn't be rejected? He didn't.

But I think for one split second at the end of his life, he took a chance. He had done little right, if anything, and had totally nothing to offer. He was literally, "just as I am." Vulnerable.

We hear nothing of the other thief who was also crucified at the same time. His story and legacy died with him on that cross. Maybe just a faint reminder of what a fool looks like.

I want to be like that that vulnerable thief. I don't know if it's because I'm getting older, or have been sick the last few years, or it's just the Holy Spirit's nudging, but I'm tired of playing it safe. I don't want to die without really having lived. And in order to do so, I need to embrace vulnerability...

Vulnerability to make mistakes...be wrong...take chances...step into difficult situations...speak when I'd rather be silent...listen when I want to talk...the list goes on and on and on. Unlike the thief on the cross, I may still have years to undertake this...he didn't.

But look what God did with his one moment in time! For thousands of years people have seen in him a hope that it's never too late...no matter how wrong you got it before, or how many mistakes you made, or how you come now...so late in life...empty-handed but heart-full.

How do we get beyond the chains society wraps us in...chains we are so weary of carrying about day after day after day?

How do we let go of perfectionism...fear...control...comparison...productivity as a sign of our self-worth...anxiety...all the have-to's that we can so easily drown in?

We become vulnerable. Open to learning through life...what it brings us and teaches us.

We finally climb over the fence and embrace our humanness as a way to God.

This is not easy. Not in any way. But if it gets me where I want to go...closer to being a Velveteen Rabbit and less a prickly porcupine, I need to do it.

The getting started part may be painful, but I love the ending...

That I will have lived...and not just survived.

And that others will see through my vulnerability, a way Home to Him.

Email ThisBlogThis!Share to TwitterShare to FacebookShare to Pinterest
Categories: glass, thief on the cross, vulnerability