When your heart rips open and love pours out 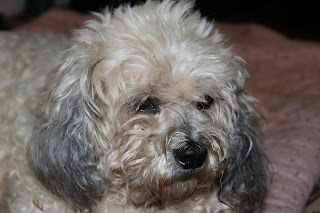 Didn't I just say that blogs always come on days when I have a dozen other things lined up to do? Well, maybe it's a test to see if I'll be obedient to the Spirit or the flesh. That lends a slight spiritual emphasis to the tension, doesn't it?

Today I want to talk about Buddy...the little gray, some-kind-of-mix-of-mutt dog we took in over 10 years ago. He was found wandering in a town many miles from here and first adopted by a man Ted was working for. Unfortunately this match did not work out, so guess who brought the dog home? Let it be written and known that it was not me this time! For once I was in favor of passing him on...we had just returned from Mexico and I was burned out and felt I did not need one more thing to take care of.

But no matter how hard we tried, Buddy just wasn't meant to be anywhere but here. He joined our pack as the littlest, and maybe the not-so-brightest member. He never bonded with our other two dogs who had such a close relationship that when one of them died, the other mourned. Buddy hated walks with a passion, which is one of my criteria for a good match of any dog for us. He had no special attachment or interest in any of us. The only thing he really loved was food...any time of the day or night, Buddy was ready to eat. Well, now that I think of it, maybe he was a good match for us!

Anyway, Buddy wanted us and that was that. He made it known from the beginning that he would do things his way. For that reason, we had no high expectations for Buddy, and he liked it like that...a life of sleeping, eating, doing his duty, and an occasional turn about the yard made Buddy a happy and contented pup.

But time changes all things...

Buddy does not move much anymore...nor does he see well. We knew this so we had blocked off an area of the deck he normally rambles in to keep him safe. But somehow he found his way to the other side and squeezed under some chairs and through the deck slats to tumble down one story and land on a merciless concrete slab. I honestly think his relaxed, unknowing state of being saved him from harm, for he emerged shaken and bruised but basically no worse for the wear.

Why is it when you think you are going to lose something, that thing suddenly becomes the most dearest part of your life? As we bundled him up and laid him on his bed, our tears began to fall and he suddenly became greatly loved. A family member. One who with all his quirks and oddities, we never wanted to do without.

But now we know that someday we will be forced to...probably sooner than later....for death comes to all. This incident only opened up our eyes to the inevitable.

Since Buddy fell I no longer get upset when he can't find his way out the doggie-door, and instead releases his pee all over the tile floor. I may be wrong, but I swear every time he does this, I find his milky little eyes looking up at me, ashamed and embarrassed. This breaks my heart..."Oh Buddy, it's okay. It's only a floor."

I have found myself more compassionate and merciful towards him. So often throughout the day now I leave what I am doing and jump up to stay, hopefully, one step ahead of him...lifting his warm and skinny body out the door, placing him gently on the gravel driveway to do his duty...always on alert for his return as so often he can't find his way back.

This happened again today. He was gone too long so I went to look for him. I found him going around in circles on the driveway, bumping into anything in his way as he tried so hard to find his way home. The home he loved.

And as I watched him, I felt another rip in my heart.

And this is where I'm going with this blog...

We are all Buddies...

Broken and in need of someone to care for us...who will love us and sacrifice themselves on our behalf...unconditionally.

We all have Buddies in our lives...

People who are half blind and lost and can't find their way home. Who can be an inconvenience and cost us something.

It takes grace and mercy to love these people. It would be so much easier to put them out of our lives...as many people do with animals they can no longer care for.

But we are made of greater things...

We are made of Christ.

Buddy has taught me more than I ever wanted to learn. From his early unwillingness to be what I thought he should be...to the present where he can be nothing but just-as-he-is...he has taught me to love unconditionally...to move in the power of God to do what is good and right and just no matter how hard it is.

I want to believe that when Buddy passes I'll be a better person for his being a part of my life...

That he will continue to live on in my life as I go forward to embrace the many Buddies, of all shapes and forms, that are still to come...

Who will need me.

I read something today that is probably the root for this ramble...

"Perhaps all transformation begins with a wound, some loss or sorrow that must be reckoned with. And then as our assumptions and identities are shaken, as the old familiar layers are peeled away, we begin to meet unknown parts of ourselves- unexpected feelings, new longings, tender vulnerabilities, and even gifts we didn't know were in us."
Magical Journey Katrina Kenison

Email ThisBlogThis!Share to TwitterShare to FacebookShare to Pinterest
Categories: Buddy