When you're tired of being Satan's punching bag 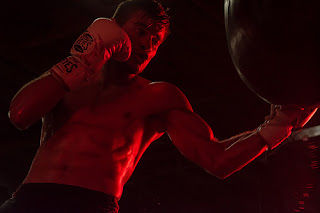 So here I sit. At my computer. Thinking that Friday is the worst day to post a blog...and of a hundred things that need to be done right now. But this is where I must be...no matter what day it is or how much I have to do. Because you see, I need to remember something. Something very important. And like a woman who finds herself standing like a mindless zombie in the middle of a food store wondering what she is doing there...why didn't she write out a list?...I, too, must write to remember.

If the Israelites were called to remember, so must I.

Last weekend we attended The Big Weekend Away, our church retreat up in the mountains. Our intention was to go and meet people...to see if God had anything to say...to take time to get away together. But having just come back from a tiring trip to a dreary and colorless Connecticut...and nursing a cold...I was less than excited at the prospect of leaving my warm and color drenched home for another round of dreariness and colorlessness...albeit this time in the mountains of North Carolina.

Going was definitely a case of the Spirit being more willing than the flesh. That and wanting to please my husband who had higher hopes for the weekend than I did...bless his heart. So, off we went...

You know, until this past weekend I had never noticed that we have a high number of extroverts in our church....but we do. Spending a weekend with a group of talkative, hand-raising, worshipful extroverts (who by the way think a Greatest Show on Earth Talent Show and 20's Dance is the absolute best way to spend an evening) is a bit of a stretch for me. Along with a bad first night's sleep I found myself ready to call it quits by early Saturday morning. All I wanted to do was slink back to my quiet, well ordered, and restful home. I couldn't see any part of this weekend ending well. But instead of running, I sat down on the edge of the bed and with tears rolling down my face, asked my husband to pray with me that somehow God would redeem this weekend and work out His will for our being there.

Or else I am going home, I muttered.  The line was drawn. Silly me, I had given God an ultimatum.


Now I can just see God rolling His eyes and laughing...patting me on the head...asking me to trust Him. It was no mistake I was there, as the speaker later reiterated. Go out the door, do what comes next, and I'll meet you in it.

So I did. And He did. And now I have something encouraging to share with you! The messages that weekend came through Antly (no, I have no idea how he got that name!), our guest speaker from a sister church in Florida, who must have been charged not to swaddle us and sing over us and put us to sleep....much as my flesh would have welcomed that.

No, instead he came bearing a wake-up call...a war cry...declaring that the time had come to go to battle against Satan, the Liar and Deceiver and the Enemy of our souls, who had been whispering for way too long into our souls the lie....

That we are not who Christ says we are!

Read: Christ is a liar and cannot be trusted, so let me tell you the truth about who you are...yuck, yuck, yuck. It's not long before we begin to see ourselves as useless...failures...never enough...helpless and hopeless. And you know that if you hear a lie often enough it becomes what you believe!

I have some shocking news: We have been listening to the wrong voice!

Satan does not want us to remember that we have been given Power and Authority through the Holy Spirit to overcome him and every one of his blasted, stinking lies. What would happen if, beginning now, we stood firm in Christ and took back the ground we have surrendered? How many walls would fall if we understood and chose to walk in the amazing truth and power of who Christ says we are!

As I heard these things, a light slowly began to illuminate my soul. I asked, Jesus, Who do You say I am?

And like a soft gentle rain on my soul the answer came through one of the worship songs...(Who You Say I Am by Hillsong, for all of you who will receive this on an automatic email...I have no idea why it won't let my videos stay intact!)


How had I ever forgotten this? When had I allowed the enemy to rape my soul of the truth that I am a dearly beloved child of God? A victor and not a victim? No matter what. Forever and ever. Amen.

Antly then went on to remind us that each of us is in a war...whether we like it or not. If we don't engage, people will die. And they are dying...all around us.

The enemy's greatest goal is to destroy us...make us fearful...render us useless and ineffective so that we are of no use in advancing the Kingdom. Yes, we will be wounded in battle. But it's the wounded who stay on the battlefield that receive the honors and awards, not the ones who run away!

The challenge had been laid...the gauntlet thrown down.

As we were led into a time of prayer and waiting on God, the image of a punching bag came to me and I heard the gentle voice of the Spirit say, Enough! You have the Power and Authority to stop being beaten up!

Repent. Declutter. Return to Me.

I'd like to say that I did that there, once and for all. I wanted to but I couldn't...it's an ongoing work in a lifetime battle. But my vision was cleared and my focus fixed and for that I am eternally grateful!

I don't know about you, but I'm tired of being Satan's punching bag. I'm tired of not appropriating the powerful Word of God...of not standing my ground and fighting....of not advancing the Kingdom.

God knew I needed to hear these challenging words this past weekend. Satan would have had me leave the retreat early in defeat and neither you nor I would be the receivers of this powerful message. God was merciful to us both.

And this week? It has been so totally different! Like waking up from the longest dream, as Keith Green sang about. I guess I could attribute it to the sunshine and the warmth and the colors blazing around me like only the South can do in the Spring. But it's not. It's because Christ has set this captive free...to walk in Freedom and Power and Authority...no longer held captive and blinded and rendered ineffective by the lies of the enemy.

Will the lies still come? Yes, Satan does not relinquish his victims that easily. He hates God and everything that God loves...

Beloved, we need to remember that we are more than Conquerors through Him Who loved us and gave Himself up for us. The battle has already been won! We, the beloved of the Lord, are the Victors...through His power...to Christ's honor and glory and the blessing of all those He has called us to fight for on His behalf.

We just have to remind ourselves of this every day. Day after day after day for the rest of our lives, looking to Christ and the Holy Spirit to provide all we need to overcome.

And let us pray for each other...encourage one another...fight the good fight of faith together. It's the sheep who stand alone who are picked off. United we stand, divided we fall!

My heart's desire is to never, ever again be a  punching bag for Satan. But rather a glorious warrior, decked out in the armor of God, overcoming and victorious over every lie the evil one throws at us, and every battle we are called to engage in. Taste and see the goodness of the Lord!

And now onward into battle, dear ones! We shall overcome! Praise God! 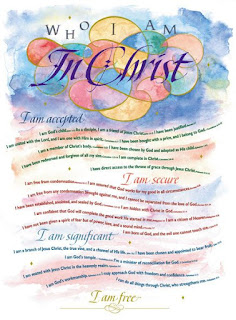