Where you are, that is home 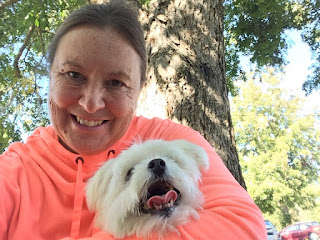 This is a story for everyone, even if you don't have a dog.

Because it's a rescue story.

And all of us have been rescued.

With the words, "Do you want her?" below the picture.

My first thought was, I knew being friends with a rescuer would get me in trouble.

My second? Ted is going to kill me.

But it was too late, I was already undone. So I spent the rest of the day working Priscilla into all our conversations...holding up her ragamuffin picture in front of Ted's face over and over again and expounding the virtues of a small dog and why she needed me. I mean...us.

Much like the onset of labor, her arrival didn't come at the most convenient time. I was on my way to the airport the following morning to pick up my sister when the message came in: You need to get her. Today.

So we did. And thus Prissy bounced her way into our hearts and lives...during a month that was way too full already with commitments: a wedding, a funeral, and new job training.

Like a mother forced to leave her child in day care, I felt guilty each time I said goodbye and closed the door behind me. How would she ever adjust with so much chaos and change? I repeatedly asked myself.

But she didn't seem to care. Every time we returned from a trip...be it to the store or another state...she would fling herself into my arms and smother me with kisses, her little body trembling with joy.

I was falling hopelessly in love with her.  It wasn't long before I realized that she didn't just need me...I needed her.

And that's why what happened next was so hard....


When she was first placed in my arms at the shelter I was given care instructions...one of them being to make sure we crated her at night. Assuming that this person knew what they were talking about, every night I dutifully placed her favorite pillow...the one from my couch...into her crate along with a dog biscuit and quietly shutting the crate door, I would tiptoe away.

It was only a matter of minutes, however, before she would start whining. And then yipping. And then full scale barking, which in a Maltese is not all that bad. But still.

My husband and I would console ourselves with the notion that we were doing the right thing and that no matter how hard it was, we needed to wait it out. If we gave in and went to her we would only be reinforcing the If I bark, they will come mentality.

So we didn't come. And it was so very hard. On all of us.

On the third night, as I tossed and turned in bed listening to her, I realized that something had changed...this time she was panting heavily between barks. And this concerned me. So sneaking quietly out into the hallway, I hid around the corner...

And I heard the sound of a breaking heart.

Her joy at her release settled it. I knew at that moment that no matter what they said, I would never crate her again.

Grabbing a blanket, I carried her to the couch, where she fell instantly asleep.  For hours I watched her fluffy white chest rise and fall. Every so often she would jump up and look wildly around, and it was only when she saw me that she would utter a soft sigh and fall asleep again.

The sunrise found me crying and praying.

I don't know what she had experienced before she came to us. In my busyness I didn't recognize the anxiety/attachment issues she was having...that she had placed her hope in me...her new human...and I had let her down.

Now I know dogs can't talk...so it had to be the Spirit. But I swear this is what I heard that night...

Where you are, that is home.

Aw, sweet Prissy. I understand. Only too well.

As many of you know, this past year has been one of the most painful of my life...the loss of my mom...illness...depression. My  world had turned dark and frightening and unknown, and many times I thought I could not...did not want to...go on one day more.

The only constant in my life was my heart cry, Help me. I can't find my way home.

My greatest fear was that I would stay lost forever.

My greatest hope was that someone would find me and lead me home.

I couldn't save myself...I needed to be rescued.

Suffice it to say that that is what did happen...not in my time...or in any way I had anticipated. It was more like a slow drag through the muddy water back up into the Light...

Where I found Jesus waiting...muddied arms opened wide. My Rescuer. My Hero.

Now that I look back on that time I realize that if I was a dog, I would have run in circles and wagged my whole body with my tail, and kissed Him endlessly as my quivering body pressed deeply into His.

Today is Prissy's Adoption Day. We had to return to the Humane Society where I originally claimed her.

As I held her shaking body, I wondered if she was thinking I would abandon her. Again.

Did I think Jesus had abandoned me over this long, horrible past year?

Maybe it's good to experience the pain of being lost, just so we can rediscover the joy of being rescued.

Sitting there, holding Prissy tightly to me in the exact location I found her two weeks ago, I cried.

Not only for all the animals who are still in cages, waiting to be rescued.

But for all the people I know who are lost...separated from Home. Some are crying out like I did to be rescued. Others have no idea they are lost.

This is where you and I come in, dear friend.

If you can relate to this story in any way...if you remember what it was like before you were rescued and adopted and brought Home into the family of God....

If you are brave enough to remember the pain of being lost...afraid...not being able to find your way home...

Then I pray it will spur you on to action.

Be the rescuer Christ needs you to be.

I thank you. And Prissy thanks you...with all our hearts!


Email ThisBlogThis!Share to TwitterShare to FacebookShare to Pinterest
Categories: lost and found, rescue finding our way home, Where you are that is home