The dawning of mercy on a frozen heart 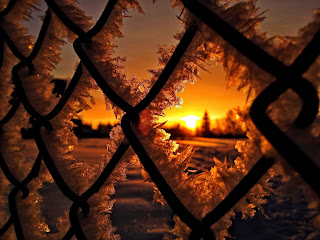 I remember the first time I heard the difference between Grace and Mercy explained:

Grace is getting what you Don't deserve. Example-Christ's substitutionary death on the cross for our sin. We deserved punishment and Hell but instead we received forgiveness and hope.

Mercy is not giving us what we DO deserve. God could have blasted the Israelites for turning their backs on Him and worshipping idols, but when they cried out for forgiveness, He showed them compassion and mercy.

Many years ago, when we were in a more legalistic environment, we spent a whole year studying Grace. And Grace became our key to healing. Unfortunately, I have not yet done the same with Mercy. My only goal has been not to confuse the two when using them in sentences. I never want to look too stupid.

So all to say, I believe in them both and am very thankful for each of them in my life. God knows how many times they have been extended to me for my stupidity, sin, and overall unwillingness to turn to Him and do what I should, not what I want.

However, to my chagrin, I am beginning to see that I am very good at receiving them, but not so good at extending them. Especially Mercy.

I don't know what's happened, but sometime in the last year I have become short of temper and patience. Mostly with people...i.e. all of humanity...basically anything that lives and breathes and that I come into contact with, excepting my dog and my chickens. They are safe.

No, it's the i----s that drive with no care or consideration for others...the s----d stuff that I read that shows that the writer has no filter for decency, much less Truth...the lack of care shown to Creation and its inhabitants...a world that seems to be spiraling downward at an extremely fast pace. And there's so little I feel I can do about it. So I get angry and scream out Justice! along with a few other not-so-nice things. Let's just say I have found myself saying and thinking and doing things that would shock my mother, God rest her soul.

Granted, after doing this, I temporarily feel better but I haven't solved a thing. I fear I am becoming an animal of different stripes who is unknowable and reactive.

I am not proud of this. I feel like something external is pushing me into this mold, but I keep popping out at the edges, not sure I want to conform to this new creation. I am literally homesick for who I used to be. Once in a while I catch glimpses of her and I catch my breath and tears well up in my eyes. Yeah, sick for home and the way things used to be.

Anyway, yesterday I was "talking" to God about this. What is wrong with me? Why can't I be more patient? Understanding? Kind? Being reactive is not helping me or anyone else, and I'm pretty sure it's playing havoc with my health as I've been self-medicating with food and not sleeping well.

And that something had a name: Rudolf Höss, an SS officer, the man in charge of Auschwitz and the grizzly deaths of almost 2 million people. A man who surely deserved Hell and damnation for all the atrocities he had committed. A man who lived with his wife and 5 children in the yard near the crematorium. A man who deserved judgment, but instead received Mercy.

It’s the Priest’s fault I learned of all this. Because yesterday, on Divine Mercy Sunday, the Priest shared about him in his homily. As he duly noted all the atrocities that Höss had committed, I felt my indignation rise up along with my blood pressure. Where was this going? Surely, if you are trying to prove the point that Mercy does not extend this far, I agree. Thanks for validating what I have been thinking: Mercy is limited and people get what they deserve.

Ugh. Did I really say that??

Then the Priest went on to tell the story of the end of Höss's life...how he had come to see the great crime he had committed against humanity, and the remorse and grief he felt over what he had done. He went on to ask the Priest for Confession and though it took hours for him to recount all the sins he had committed, he received absolution and Communion the following day. He died by hanging at Aushwitz...a forgiven man.

Whoa! Are you serious??? On a scale of badness he was off the scale!

Mercy that big? For someone that evil?

And then it fell on me, a truth that I had been missing for ever so long...through all my days of self-righteousness and judgment and critical thinking...

I was greatly lacking in the Mercy department.

The problem with Mercy is that it runs counterintuitive to our reasoning. And in my mind there are levels of sin, similar to Dante's rings of Hell...from stealing gum at the convenience store to taking the life of another. But the lives of almost 2 million people? That tipped my scale on how much could be forgiven...how big Mercy was. I sat there for quite a while, rolling it over and over in my mind and this was my new-born conclusion...

God is real. Mercy is real. It's His to do with as He likes. And the bottom line is, God has made Mercy boundless and available to whosoever should ask for it...no matter what they have done. Repent and receive Mercy. Me, you, Hoss.

The Lord is gracious and merciful, slow to anger and abounding in Mercy.

Think about Jonah, who received the Mercy of God many times over, but in his heart judged Nineveh unworthy of the same. He took more care of the plant that provided shade on his behalf than he did of the lives of those God loved.

But God said to Jonah, "Do you have a right to be angry over the gourd plant?" Jonah answered, "I have a right to be angry- angry enough to die." Then the Lord said, "You are concerned over the gourd plant which cost you no effort and which you did not grow; it came up in one night and in one night it perished. And should I not be concerned over the great city of Nineveh, in which there are more than a hundred and twenty thousand  persons who cannot know their right hand from their  left, not to mention all the animals?" (Jonah 4:9-11)

I may be wrong but I think God could be saying that the Ninevites were not too swift, not knowing their right hand from their left. Which means intelligence is not a requirement for Mercy.

And I love that God was also concerned about the animals!

So where does this leave me?

It leaves me humbled and very aware that I do not live in the same sphere of Mercy that God does. I am deeply aware that I need to do a study on Mercy, so that the Word of God can do a work on me...so my heart and soul can be softened. So ultimately, I can become like Jesus. Which is the goal of God for all of His children.

"We can learn from Jonah's mistakes. We are not to view ourselves as better than those who are different from us- instead, we are to see others as God sees them: sinners in need of a Savior, just like us. We should be eager to share his Gospel with others, they they, too, may understand God's power and mercy.”

Jacki and I were talking yesterday and we came up with this...something practical that we can aspire to on our journey to becoming Merciful...

"Don't fret or worry. Instead of worrying, pray. Let petitions and praises shape your worries into prayers, letting God know your concerns. Before you know it, a sense of God's wholeness, everything coming together for good, will come and settle you down. It's wonderful what happens when Christ displaces worry at the center of your life.

Summing it all up, friends, I'd say you'll do best by filling your minds and meditating on things true, noble, reputable, authentic, compelling, gracious- the best not the worst: the beautiful, not the ugly; things to praise, not things to curse...Do this and God, who makes everything work together, will work you into His most excellent harmonies." (Philippians 4:6-9)

And that, my friends, is my challenge. And my hope. I need to make a U-turn on this Mercy thing, or become someone that, in time, no one will want to be around. Heaven knows I want to be a kind, gentle old lady, not one lashing out, with no filter, with a hard and embittered heart. I know it could happen as I've seen it. But God, please, not to me.

Be merciful to me, Lord, a sinner. Be my guide, my example, my enabler on this journey to becoming more like you...a blessing, not a curse, a mini-Christ in a world that desperately needs Grace and Mercy. Remove the fence from around my heart and let Mercy dawn in my heart.

To your Honor and Glory, and the good of all those you dearly love. Which, is everyone.